Cryptocurrency: The Future of Money or a Wasteful Gimmick?

Modern money has problems. For one, if you want to give someone money directly, you need to do so in-person. Sure, you can send them cash or a check in the mail, or use a service like Venmo or PayPal, but all those methods aren’t direct – there’s always a middleman you’re trusting to carry your money to the other person. Another problem is inflation. In the case of the dollar, which is a fiat currency – meaning it has no physical or intrinsic value unlike gold, for instance – the government can just print more banknotes as it sees fit, devaluing the currency as a whole.

Cryptocurrency aims to solve these problems. Operating on the basis of a decentralized ledger typically taking form in a data structure called blockchain, cryptocurrencies such as Bitcoin and Ethereum offer several advantages over a conventional currency such as the dollar:

Cryptocurrencies are thus often more convenient given their directness and anonymity. Most currencies, however, often have at least one of the following problems:

Most cryptocurrencies operate on a structure called blockchain that serves as a transaction ledger. You can think of blockchain as an append-only database – you can write something to it, but you can’t delete something from it. This makes it useful for logging transactions. Since cryptocurrencies often are distributed (meaning, again, that there is no central authority regulating it), several nodes, or, computers, that are part of the distributed network are required to cryptographically verify each transaction to prevent any tampering with the blockchain. This process is called mining. Given the decentralized nature of the currency, an incentive is needed for people to mine in order to maintain the system, which is usually a monetary reward of the said currency.

Oftentimes, in addition to having to verify a block of transactions, miners often need to also solve a complex mathematical problem in order to receive the reward – as otherwise it would be far too easy. In the case of Bitcoin, miners need to find a sequence of 32 bits, called a nonce, so that when the block is hashed, the resulting hash is less than or equal to a target. The lower the target, the higher the difficulty – which is simply how hard the currency is to mine. The nonce is a field inside the block – changing the nonce affects the resulting hash of the block.

You can think of hashing as one-way encryption with a set output size. A simple hash function could be one that returns the remainder of the input divided by 100. In this example, the hash of 456 would be 56, and the hash of 678 would be 78. Hashing is often used for comparison – if, say, we wanted to compare two 20-digit numbers, we’d need to compare every single digit. If we compare the hashes though, we’d only need to compare 2 digits. This comes at the cost of a potential “collision”, which is when two pieces of data that aren’t equal result in the same hash. In our case, it’s easy to find a collision – take 134 and 234 for example: both of them produce the same hash of 34. Our hash function is pretty bad – there are better algorithms out there such as SHA256 and MD5, that not only have a lower likelihood of collision, but also make it nearly impossible to tell from the output hash what the original value was.

This operation often boils down to pure guesswork. Typically, changing even the tiniest value in a block results in a vastly different hash. In addition to this, a miner isn’t even guaranteed to get the Bitcoin – as only the first miner to come up with this solution for a block gets the money, in what’s now as proof-of-work. Bit… inefficient, right?

As a result of this, it’s a really computationally-intensive task to mine Bitcoin – and pretty much any other cryptocurrency that uses proof-of-work. A miner has to constantly guess hashes – which they aren’t even guaranteed to get the reward in doing, as someone else doing the same thing might have guessed the target hash first – adding redundancy to the already-inefficient process. What’s even worse, is that this problem only gets bigger as more miners join.

As it currently stands, it’s almost impossible to earn a profit mining Bitcoin – as well as a handful of other cryptocurrencies – solo, as you’d typically be paying more for the electricity and equipment used to mine than actually earning the crypto itself. Most who do mine are typically part of a pool, which is a group of people who essentially agrees to split any profit they earn, while increasing their chances of winning that proof-of-work lottery by combining their computing power. In addition to this, full-on large-scale mines with thousands of computers exist in China, where an estimated 65-75% of all Bitcoin mining takes place. Companies specifically dedicated to mining cryptocurrency such as Genesis Mining also exist, investing thousands into state-of-the-art hardware while offering contracts for customers to “buy” a mining rig with an advertised set hashrate to mine for a set amount of time, typically a year.

Massive Bitcoin mine in Russia 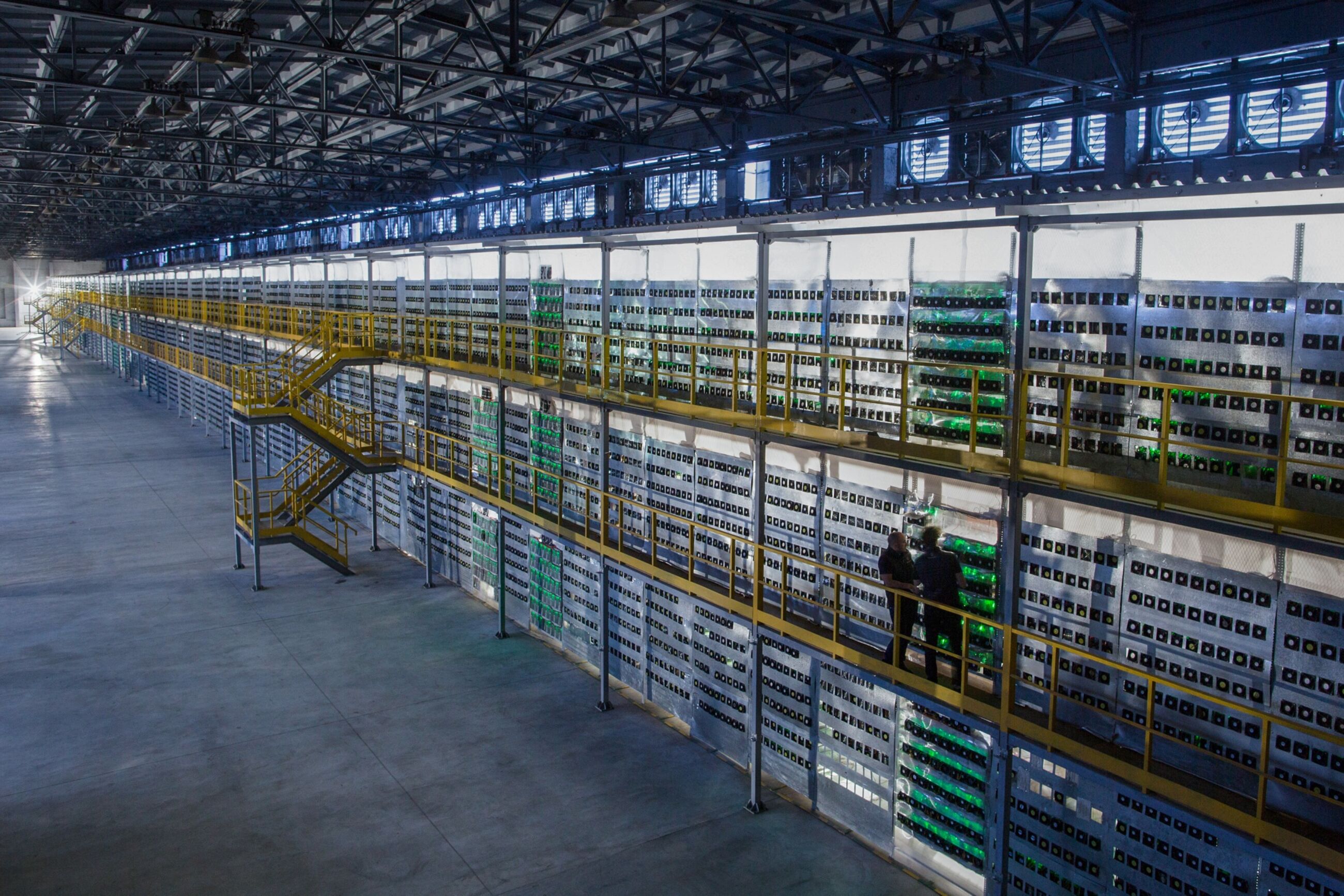 All in all, the combined energy consumption of Bitcoin mining alone is an estimated 110 terawatt-hours per year – about 0.55% of global electricity consumption, and pretty much equivalent to the energy use of some small countries such as Switzerland or Sweden. That’s significant, especially given the fact Bitcoin isn’t even widely adopted as a currency and that plenty of other mineable currencies exist. Renewable or not, using that much energy to support a currency that isn’t even widely used is… controversial.

As previously said, mining cryptocurrency is often a highly computationally intensive task, typically involving a lot of what is essentially guesswork to find a valid hash. As a result, miners often invest in devices that have a high hashrate, such as GPUs, aka graphics cards – a high hashrate means more hashes to try per second, meaning a higher chance of guessing a right hash. Several supply shortages have occured in part due to cryptocurrency miners purchasing the majority of available stock.

Two notable shortages have occurred, each correlating to the price of Bitcoin peaking. One such shortage happened in 2017, involving Nvidia’s 10-series GPUs, which offered a good price/performance ratio, making them an appealing investment to a miner. The other started in 2020 and is still ongoing, this time involving Nvidia’s new 30-series GPUs as well as AMD’s new Radeon 60-series GPUs, as well as a variety of other parts – for instance, a new cryptocurrency called Chia, which aims for better energy efficiency, has been disrupting hard drive and SSD markets recently. Unlike Bitcoin and Ethereum which use proof-of-work, Chia uses something called proof-of-space. What this means essentially is that miners, instead of forcing their GPUs to guess hashes all day, are instead allocating large amounts of disk space to Chia plots, receiving the currency in return. In fairness, the crypto rush isn’t the only factor responsible for the current shortage – the coronavirus pandemic has also been responsible for disrupting the market, with demand for parts going up yet supply going down due to quarantine protocols.

Finding a GPU in stock at a reasonable price in 2021 remains a nearly impossible task.

Given the above two problems, we can conclude that in order for a cryptocurrency to be sustainable, it: 1. Should be energy-efficient and 2. Preferably not disrupt computer parts markets as people rush to mine it. Such currencies do, in fact, exist – an example being Nano. The remaining problem pretty much every proper cryptocurrency has is volatility.

Since cryptocurrency often isn’t backed by anything concrete – as doing so would typically need a central authority responsible – its value isn’t tied to anything. Now, if the currency was widely adopted, this likely wouldn’t become an issue – as the value of the currency would be simply tied to the fact that people accept the currency – for example, you could rest easily knowing that 1 e-coin can always be used to buy 2 apples or 1 orange.

At the moment though, this isn’t the case. Many people see cryptocurrency as just an asset to speculate upon – buy low, sell high – and don’t take it seriously. This in turn leads to highly fluctuating exchange rates, which discourages anyone from actually using the currency. After all, no one would want their money to suddenly be worth a fortune one minute, and almost nothing the next. Unfortunately, as long as people continue to view cryptocurrency as merely an asset to speculate upon, it doesn’t seem likely that any proper, decentralized cryptocurrency will become widely adopted.

The peer-to-peer aspect of cryptocurrency makes it a popular avenue for scammers and other criminals to obtain money on. Cryptocurrency being decentralized means that once you send someone money in it, there’s no guarantee you’ll be able to get it back – unlike with other electronic payment methods, there’s no way to dispute or chargeback a transaction. This means that if a scammer convinces a victim to send them money in crypto, that victim just lost that money irreversibly. Investment scams, aka Ponzi schemes, have also been on the rise, with a notable one being Bitconnect – a cryptocurrency that promised impossibly high returns for investors – 1% daily compounded interest – and ultimately collapsed as people lost confidence in it.

The anonymity that many cryptocurrencies offer also make them a popular method for criminals to demand ransoms – as on the blockchain, only wallet addresses are shown – the owners of those wallets remain anonymous. Some have argued that the rise of cryptocurrency has correlated with the increased rate of various ransomware cyberattacks. A notable example is the cyberattack on the Colonial Pipeline that occurred on May 7, in which computerized equipment responsible for billing customers was compromised, which led to the pipeline being shut down as a whole in fears of the hackers having gained access to more crucial systems. This in turn led to people panic buying gasoline, leading to even further increase of gas prices in the american Southeast. Having paid off the 75 BTC ransom (~4.4 million dollars), the pipeline was restarted on May 12. The incident is a frightening example of just how much damage a group of cybercriminals can do, and a big factor in the argument to ban cryptocurrency as a whole – after all, if the technology benefits no one except criminals and speculators, why not ban it?