The Concerning Potential of AI and Personal Data Collection

Artificial intelligence has come a long way in the last 2 decades. Self aware machines like the androids from Blade Runner are still, fortunately, fictional — but failure to replicate human intelligence does not make the technologies we’ve created in real life any less impressive. Modern AI can perform tasks such as quickly recognizing faces in images, driving cars, and even do things no human can accomplish, like convincingly faking anyone’s voice. As is the case with most powerful technologies, unfortunately, AI has great potential to be used for good as well as evil.

The main focus of this article is to describe the more sinister applications for AI, but for the purpose of contrast it’s worth listing a few ways AI has been applied in modern society that are objectively good.

AI can be used to quickly analyze medical images, accurately detecting diseases while also taking into consideration past records. Such a diagnosis would be less prone to bias than, say, a doctor who discounts a patient’s severe pain as an overreaction. AI can also speed up the creation of new drugs by predicting the outcome of microscopic processes like protein folding and molecular binding.

Taking data such as street layouts, speed limits, as well as past traffic data allows for an AI model to plot the fastest route from point A to point B and give an accurate ETA. A good example is Google Maps. Self-driving cars are probably the first example that comes to mind when you hear “AI” and “transportation” is the same sentence, but AI has its uses in contemporary human-driven cars as well — for instance, a model can be trained to accurately detect when a collision is about to occur and apply emergency brakes. A model can also be trained to learn the driver’s habits, namely how aggressively they press on the gas pedal, and give accurate fuel estimates based on that.

This is probably the most prominent example of AI being used in a way that is subjectively bad. Ever wonder why Google, Facebook, and a plethora of other websites are free to use? Advertisements shown to you certainly play a part in financially supporting these services, but a large bulk of that income comes from collecting, analyzing, and selling user data to advertisers, who will then serve ads specifically targeted to you, increasing the likelihood of you buying a product. Feeding that AI with more data only makes its predictions more accurate — ever think of something and see an ad for it 5 seconds later?

Now, this practice isn’t inherently bad — after all, I’m sure most people would rather receive targeted ads than pay to use a service like Google. However, for most people there’s a point after which the data collection is seen as too intrusive. Most people would object to such a service eavesdropping on your conversations through your microphone, but would be fine with being anonymously sorted into interest groups based off of what they search on Google, for example. Anonymity is usually what it comes down to — I don’t mind some service targeting ads at me so long as the ads are targeted at some interest group I’m part of and not to my identity specifically. A good analogy is junk mail — it’s far creepier to receive a junk letter addressed specifically to you and hand-signed by the sender than it is to receive a printed letter that was likely sent to millions of others.

With lack of anonymity comes a rather hairy problem that boils down to the fact that everyone is unique in terms of behavior. Tying one’s usage data to their identity allows for a rather dystopian tracking system to be built. Imagine this: you’re on the run from an authoritarian government. You’ve gotten surgery to change your facial appearance and voice, and an entirely new identity to prevent the regime from tracking you down. You get to a computer and start typing. Suddenly alarms flash and police sirens sound. You didn’t log into any account, your body is indistinguishable from your old self, but one thing remained: your behavior. Knowing your past actions and habits, the system was able to narrow you down based simply on how you type: factors such as keys you struggle typing, timings in between keystrokes, and words per minute. Of course, realistically a recording of keystrokes would not be enough to track a person down, but there is only so much data that needs to be collected until the trend becomes unique to only you.

Hong Kong, a former British colony, is a special administrative region of China that exercises relative autonomy from the rest of the nation, with rights like freedom of speech and the press outlined in the constitution known as Hong Kong Basic Law. Recent actions by the CCP have infringed on those freedoms, however, resulting in an ongoing wave of protests. 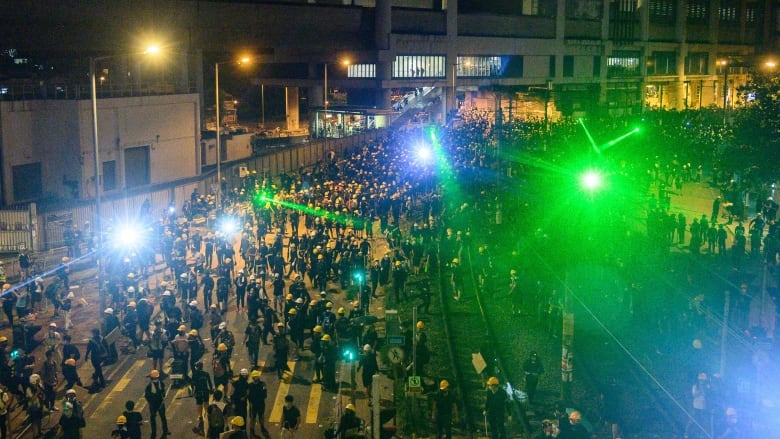 Hong Kong police have utilized facial recognition paired with CCTV cameras to track down protesters, resulting in many wearing masks to prevent being tracked, and subsequent prohibition of face coverings — something that 20 years ago would be a prime plot for a cyberpunk dystopian novel. Whether or not the use of facial recognition to track down potential criminals is ethical remains a matter for debate.

Lying is natural human behavior. As such, we as humans tend to take most information in with a grain of salt — for instance, if I heard someone tell me that the moon was made of cheese I wouldn’t believe them unless they provided concrete evidence to back up their argument.

The problem with evidence, though, is that it can be faked. Eyewitnesses can be told to lie, documents can be forged, and even photos can be doctored. But until recently, one form of evidence has been extremely trustworthy — video footage.

Suppose for example that I am trying to fake a video and audio recording of the president saying he hates ice cream. Before the age of computers, such a fake would require me to hire trained impersonators to either create an entirely new fake video, or edit existing footage. The latter option would be made even more difficult by the fact that one would need to edit each frame individually by hand. Going through this process in most cases wouldn’t be worth it as it likely would take several days to fabricate such evidence.

AI makes this process much easier. Free open-source software exists that not only allows one to do things like synthesizing someone’s voice and facial expression, but can also be run on any modern computer — allowing anyone with a half-decent computer to create such “deepfakes”.

With deepfakes arises the question: what can you trust? Now, nearly every single medium of information can be tampered with — documents can be forged, images can be edited, and videos and audio footage can be deepfaked. Fortunately, at the moment, most deepfakes can be recognized if one looks closely — facial expressions can be too still, voices can be monotone, etc. As AI technology progresses however, in the sense that models can be trained far quicker, the gap between deepfakes and reality will likely close.

With powerful technologies like this, regulation tends to take a couple of years to catch up. We will likely see new laws passed in the near future regulating deepfakes and data collection — some already have been, such as California’s Assembly Bill 1215, a 3-year moratorium on police using cameras for facial recognition and California’s Consumer Privacy Act, a statue giving consumers the rights to know and delete personal information businesses collect, opt-out of the sale of their personal information, and not be discriminated against for exercising those rights. Deepfakes as a matter of national security have also been addressed in the National Defense Authorization Act for Fiscal Year 2020. It is only reasonable to assume more legislation on this matter will follow.