Should the US Election Systems in the Primaries & General Election Change?

The first is the type of Election (Non-Partisan) that is used to reduce the set of candidates that go on to the General, and if the Candidate received more than the 50% in the Primary, he/she will automatically be Elected without the need to run again (to the General). But if neither candidate gets the majority of the votes, that is twice as many they can pass in the 1st Round Voting (Primary) as they can win in the 2nd Round Voting (General). So a Single Seat Election Primary would allow these Top 2 Candidates to participate in the following General (Election).

The second type of Election (Blanket Primary) is when a Qualifying Primary is applied to a certain Partisan Election, that’s when it’s called & known as the “Blanket”. Which technically applied to the State of Louisiana (mainly), it means that no Candidate (regardless if it’s a Democrat, Independent, Republican, or 3rd Party one) wins enough votes to a Primary, then the 2 remaining ones (regardless of their affiliation) that will be receiving the Highest Vote Pluralities, is going to a General that is equal to a Run-Off. Because of this, it has big effects on the elimination of the minor parties from the General.

Primary Elections (or nomination of the Primary Voters preference to be the standard bearing candidate) does apply mostly to the candidates for President, (Federal) Senators & Representatives, Governors, Vice Governors, (States) Senators & Representatives, etc. In the Presidential Primaries of the current systems, there is an arranged list of States that’ll do the Voting Primary. In the Democratic National Committees States Primary Voting Process, the first state will go to have the voting is in IA, then NH, NV, SC, AL, AS (American Samoa), AR, CA, CO, ME, MA, MN, NC, OK, TN, TX, UT, VT, VA, DA, ID, MI, MS, MO, ND, WA, NMI, AZ, FL, IL, WI, AK, WY, OH, KS, NE, OR, HI, DC, IN, MD, MT, NM, PA, RI, SD, Guam, US VI, GA, WV, KY, NY, DE, NJ, LA, PR, CT. And there are instances where a Presidential Candidate dropped out but if they met the qualifications of the other states to be in their Presidential (Democratic) Primary Voting then they will remain on those ballots regardless if those candidates drop out or not, and the equivalence of the Primary Votes is the State Delegations’ Votes to any Presidential Candidate, there are also a mark of those Delegation Votes that will be given to Candidates and if one of them hits the required number of votes then they will secure their Party’s (Both Democrat & Republican) Nomination.

The Primary Voting meanwhile in the rest is just the same as the Presidential ones, but the difference only is that they don’t need the Congressional Delegation Votes, the will of the Partisan Primary Voters will determine who will be the General and/or Mid-Term Candidates that they want to be. 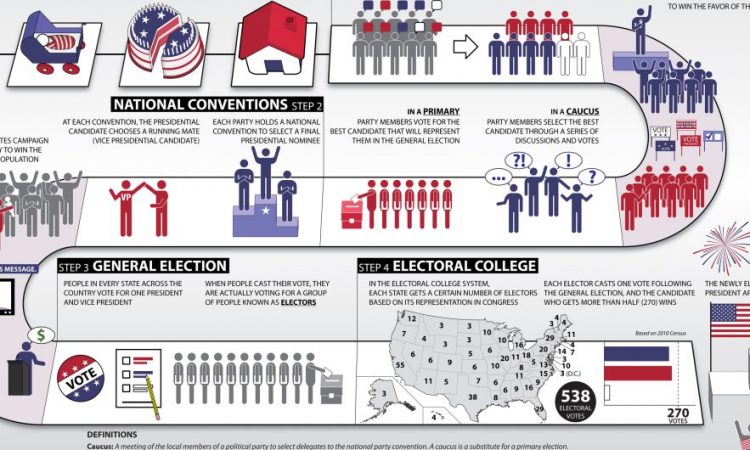 What is Rank Choice Voting (RCV)?

It’s an Election Voting System that voters use a Ranking Ballot to select more than a single candidate and to rank them their choices in a sequence of Ordinal Scale: 1, 2, 3, etc. and its similar term is still being used by an American Voting Organization (FairVote) to refer the uses of ballots with the specific methods of vote counting, that can either be Instant Run-Off Voting, for Single Election Winners, or the Single Transferable Voting (STV): for Multi Election Winner. And I want to talk about the only RCV that I like and that is the Single Transferable Voting, it’s a voting system that resembles Proportional Representation through multiple constituencies rather than only one. Since they’re the same as the RCV’s similar processes, they’re used in an exchange way. Any candidates that achieve the number of votes that are required for an Election Quota and the Surplus Votes. After this procedure is done, if not all of the seats have been filled, then the candidate receiving the lowest vote numbers is the first to be eliminated, and their votes will be redistributed to the voter's next choice. This will just be repeated until all of the seats are filled in, the method was called Hare-Clark System, and the outcome must be proportional to the electorate. Voters can also vote for the members of the different Political Teams (ex. the Voting Process in the Philippines Senate Election, where 12 Preferred Senate Candidates are chosen by the Voters regardless of their Political Affiliations) to the same ballot rather than just a single Political Party.

That’s the reason why I want the STV to be used in the Presidential (General) Election in the US firstly, so the voter’s can have the freedom to orderly ranked up the Presidential & Vice Presidential Candidates, regardless of their Political Affiliations (sometimes having the instances of being completely Independent). I want it to be applied also to the Primary Winners in the Federal (Senators & Representatives), Gov & V-Gov, State Legislatures, etc. in both General & Midterm Elections, and should also be applied in the Democratic, Republican, Green, Libertarian, etc. Primary Elections as well. Here’s another one, I do want to see both (Establishment) Democratic & Republican Parties COMPLETELY ABOLISH their “Congressional State Delegation Voting” especially because of what happened in the 2016 WV Democratic Presidential Primary where Senator Sanders actually WON ALL 55 Counties of the State but the WV Dems (mainly Senator Manchin) still GAVE the most Delegation vote to Hillary Clinton during that year.

And who wins in the STV’s, without the need to get to the quota of 50%+1 Vote Percentage will win after the counting of the Voting Ranks in all of the candidates. I proposed it like that so no need for a run-off for the top 2 candidates that (still) won’t reach 50% of the Vote in the Election.