Opinion: AOC Needs to Practice What She Preaches

Congresswoman Alexandria Ocasio Cortez (D, NY) regularly makes headlines for her progressive views and her frequent social media activity. However, being a prominent politician, Ocasio Cortez also receives negative attention in the news from critics, the latest example of such being social media platforms (primarily Twitter) exposing her activities on her vacation in the state of Florida during the winter holidays. Ocasio Cortez’s actions in Florida received widespread scrutiny because what she did seemingly went against what she stood for as a legislator. 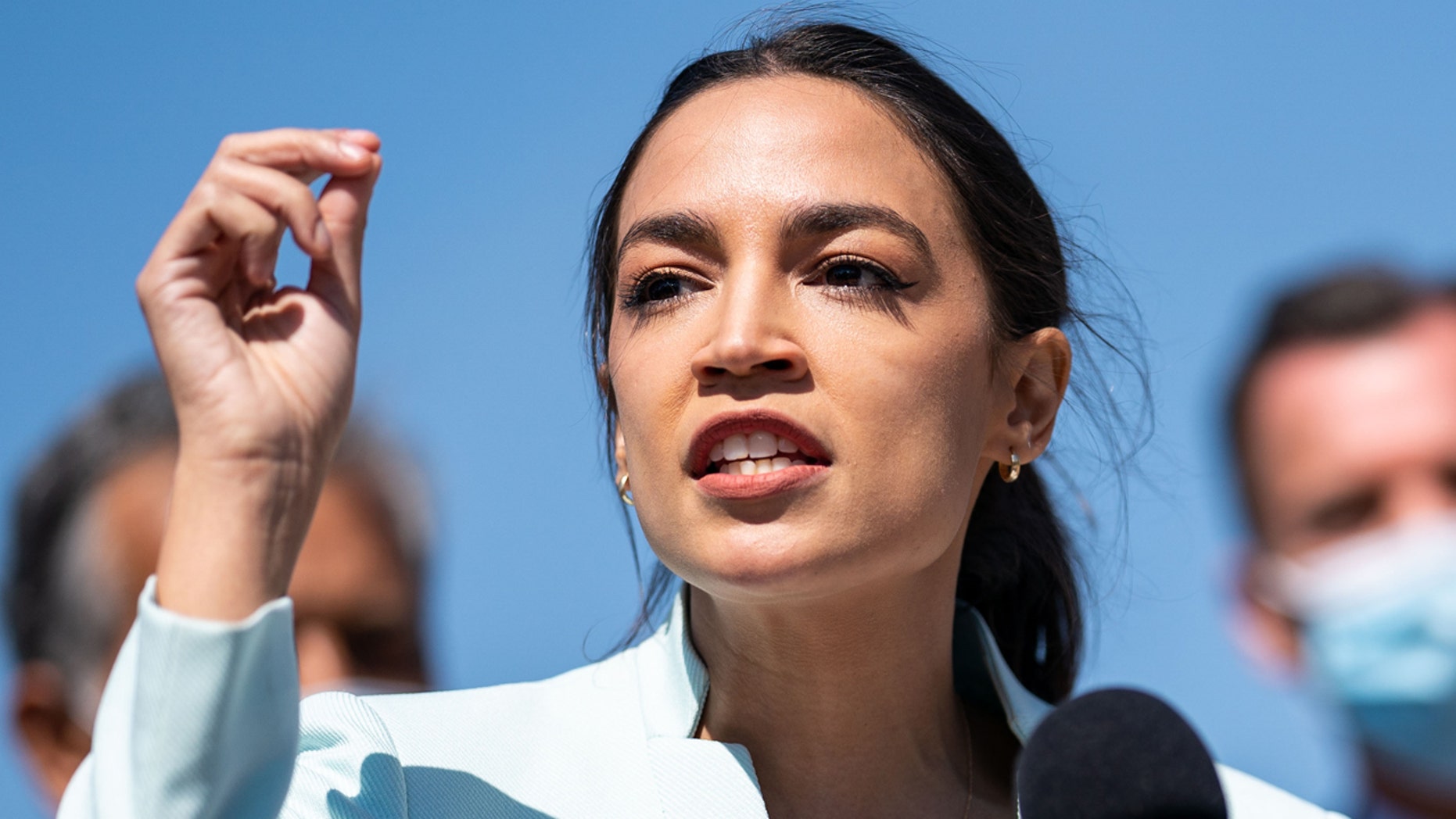 The mainstream media was first made aware of Ocasio Cortez’s presence in Florida on December 30, 2021, when National Review put up an article with pictures of Ocasio Cortez and her significant other, Riley Roberts, enjoying drinks at a sushi bar. In one of the pictures, Ocasio Cortez is not wearing a mask even though she does not appear to be actively drinking and is instead using her phone.

A maskless Ocasio Cortez using her phone at a sushi bar 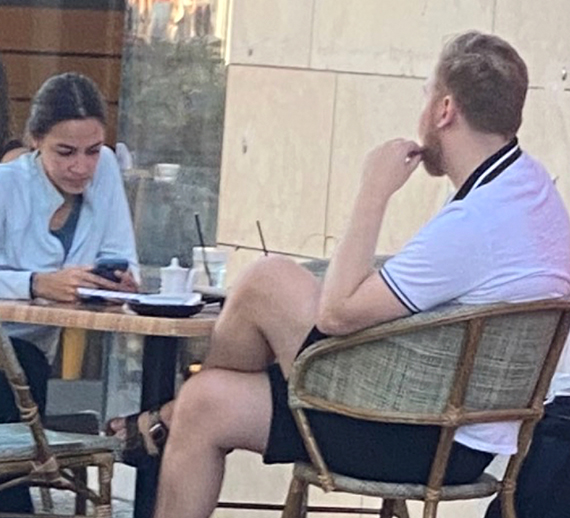 Upon seeing the pictures posted on Twitter, Florida Governor Ron DeSantis’s Twitter team welcomed Ocasio Cortez, referencing DeSantis’s leadership as a reason for Ocasio Cortez being able to have a vacation in Florida. Ocasio Cortez replied the following day, questioning DeSantis’s whereabouts. In the meantime, there was a bit of a side story as former Newsmax Broadcaster Steve Cortes pointed out Roberts was showing his bare feet in a public area, and in hindsight, this was unnecessary as it had nothing to with the fact that Ocasio Cortez was in Florida. Ocasio Cortez responded on Twitter, citing that Cortes’s statement was inspired by Republicans being angry at not being able to date her, and went on to suggest that her critics were driven by sexual frustration towards her and other women. (New York Post) On January 2, 2022, FLVoiceNews Journalist Brendon Leslie revealed that Ocasio Cortez was still in Florida, and tweeted a video of her interacting with others at a crowded bar wherein she along with many of the bar’s patrons are maskless. While Ocasio Cortez did not directly respond to the latest revelation, she did post an Instagram story showing Roberts’s feet claiming that she was satisfying the “Republican obsession with Roberts’s feet”. 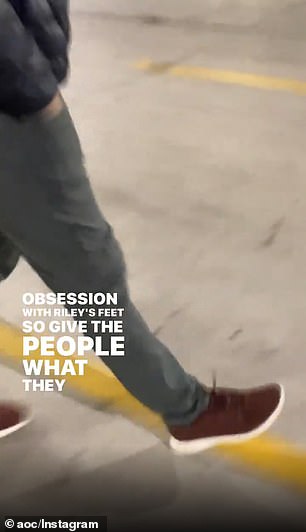 According to USA Today, Florida Governor DeSantis doesn’t see eye to eye with local governments as he has been working with Florida legislators to come up with legislation that prevents local governments from enforcing mask mandates and social distancing requirements upon state counties. However, the CDC still encourages masking up in the state for everyone aged 2 and above. (littler.com) Restaurants in Miami also remain open, with both indoor and outdoor dining without mask restrictions. (Miami Herald) On the other hand, within the congressional district Ocasio Cortez represents (NY-14), mask mandates are in place at all indoor establishments and proof of vaccination is required to enter a restaurant even if the customer is going to dine outside. (nycgo.com) The CDC also encourages masking for highly crowded outdoor areas, such as the packed bar Ocasio Cortez was seen in.

Ocasio Cortez at a full bar in Miami 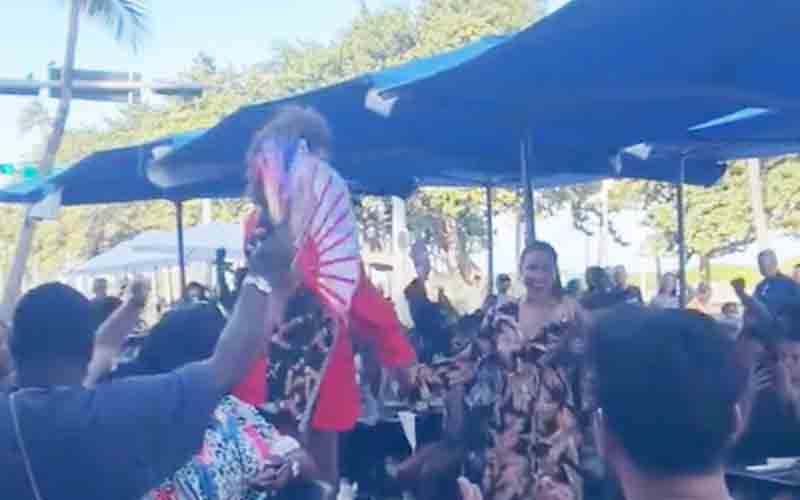 Arguably, the most intriguing fact regarding Ocasio Cortez being in Florida is that she is yet to offer justification for being there. In theory, the only reason Ocasio Cortez needs to offer justification is because of things she has said in the past, which strongly imply that vacationing in Florida is the last thing she would ever do. When US Senator Ted Cruz (R-TX) left Texas during a winter storm for Cancun, he was heavily criticized for it by the media, resulting in him returning early from his vacation. On September 9, 2021, Ocasio Cortez tweeted “I know Republicans’ idea of “disaster relief” is flying to Cancun while the power’s still out, but unlike that approach I actually give a damn” (Twitter).

Another thing worth noting is that Ocasio Cortez has previously bashed the state of Florida and Governor DeSantis for the state’s COVID-19 policies. She continued to do so during her vacation, the day after photos of her in Miami first appeared in the media. She tweeted “I’d also be happy to share some notes from @GovKathyHochul’s work in NY since he [DeSantis] seems to be in need of tips!”

Ocasio Cortez makes it clear that she believes her state, New York, is doing a better job of handling COVID-19 compared to the state of Florida. She also thinks that the governor of Florida can learn a thing or two from the Governor of New York. Finally, the state of New York was going through a public health crisis during Ocasio Cortez’s vacation. So why did she come to Florida despite all this?

It all boils down to a lack of consistency and the “rules for thee, not for me” mentality. Ocasio Cortez’s actions demonstrate that she is guilty of possessing such a mentality. She has advocated for mask mandates for much of the pandemic and criticized states like Florida that did not implement them, and she ends up being seen maskless in a packed Florida bar. It is worth noting that Ocasio Cortez is a “big government” politician who believes the government should be more present in the day-to-day lives of ordinary people. The government becomes more powerful and the power goes to politicians that make up the government like Ocasio Cortez. It would be harder to hold the government accountable for anything if it became more powerful, similar to how it would be harder to hold Ocasio Cortez accountable for failing to practice what she preaches if she becomes more powerful. The American people should not be represented by politicians who can’t even stay true to themselves. Consistency is important. Politicians should preach consistency, instead of policies that they themselves will go on to break.